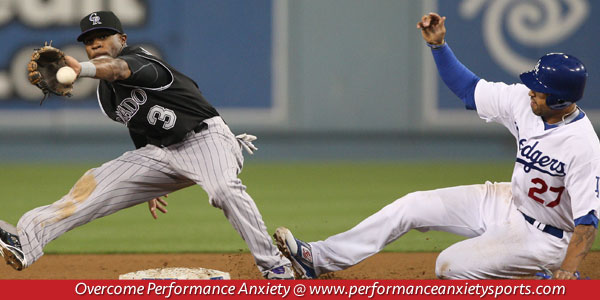 How to Be a Clutch Performer

In game one of the 2013 NLCS against the Los Angeles Dodgers, Carlos Beltran displayed his clutch ability by hitting a walk off single in the 13th inning to secure the victory for the Cardinals 3-2. Beltran also drove in the first two runs in the third inning to tie the game, 2-2.  Beltran also delivered defensively as he threw out Mark Ellis at the plate who was tagging on a sacrifice fly keeping the game tied in the 10th inning.

Being clutch or choking… it’s a matter of perspective. If you view pressure situations as opportunities to grow your athletic ability and succeed, you’ll strive for excellence instead of fear failure. In clutch situations, you want to feel “excited” and your body will physiologically prepare itself to perform optimally. Alternatively, if you approach pressure situations with apprehension and fear, you focus too much on avoiding failure and thus play more tentatively.  You will become anxious and your body will over control your performance and thus not perform freely.

How to become “CLUTCH”