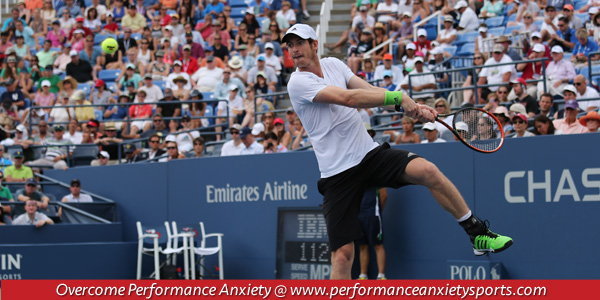 Do You Choke in Tennis Matches?

Do you “choke” during tennis matches? Are you a good practice player but under-perform at competitions? Performance anxiety can wreak havoc on an athlete mentally and interfere with your ability to perform at a high level.

Performance anxiety in sports, sometimes referred to as “choking,” is stress caused by how an athlete perceives a competition, not the competition itself. Your thoughts about a match often dictate your level of performance. For this reason, many professional tennis players hire sport psychology coaches to learn mental game strategies in order to achieve more of their potential.

For example, a tennis player facing a higher ranked opponent may exaggerate the importance of the event and think, if he loses, he will never achieve a top ten ranking. The anxiety about the perceived importance of the match may cause increased muscle tension (decreasing the fluidity of movement), increased respiration (causing the player to fatigue more quickly) and negative thinking (causing catastrophic thinking and over-analyzing match play).

Stanislas Wawrinka is a 28 year-old Swiss tennis professional who is no stranger to the pressure of high-level competition. Wawrinka is currently ranked third in the world despite never having won a Grand Slam event until the 2014 Australian Open. Wawrinka entered the Open as an 8th seed, and his road to the title included victories over Novak Djokovic (2nd seed) and Tomas Berdych (7th seed). The culmination of Wawrinka’s first Grand Slam victory was his defeat of Rafael Nadal (world ranked No. 1) in four sets; 6-3, 6-2, 3-6, 6-3.

Despite Wawrinka’s dominant performance, he admitted to his battle with performance anxiety, “ I never expect to win a Grand Slam. I never dream about that because for me, I was not good enough to beat those guys.”

Wawrinka stated his key to overcoming his match anxiety was to have fun, be prepared and not to over-think, “What was important was to enjoy also, not to be too nervous, not to be too focused, to enjoy and be ready for the match.”

Remember that if you are aware of how performance anxiety affects your thoughts about top-level matches and your ability to perform at these matches, you can manage your emotions and elevate your level of play.